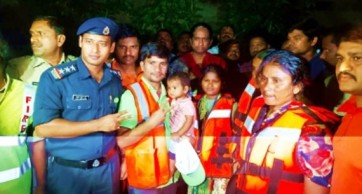 The family, including three women and a child were stuck in a farm house in the river bed on the city outskirts.

After a five-hour-long operation, the NDRF team with the help of police rescued the family from the flood waters at Gandipet, as the Osman Sagar reservoir across Musi is popularly known.

The family, working at a farm house, had alerted the police after being caught in the flood waters. Police, officials of the revenue department, Hyderabad Metro Water Supply and Sewerage Board (HMWS&SB) and Greater Hyderabad Municipal Corporation (GHMC) rushed there.

With the rising flood level, authorities sought the help of NDRF. Yogi Kumar Verma, who was leading the NDRF team, told reporters that five persons were rescued with the help of an inflatable river boat."We have evacuated all the five, including a child. They are all safe," he said

Sunil said he searched the telephone number of authorities over Google and sought the help as the water level had suddenly started rising.

Following heavy rain in upstream Vikarabad and Chevella areas, the Musi river has been receiving huge inflows. Authorities have opened the gates of twin reservoirs Osman Sagar and Himayat Sagar to let out the water downstream.