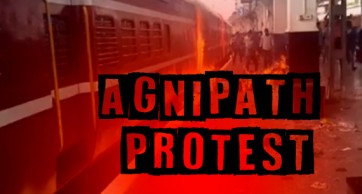 The protesters went on rampage at the station, setting afire East Coast Express, stalls and other railway property.

Demanding scrapping of the recently announced scheme, the youth sat on the railway track.

Railway and the city police were trying to bring the situation under control.

The police also opened fire in the air to control the situation.

The protesters are said to be mostly from the northern states who were in Secunderabad to appear in the Railway Recruitment Board exams.

Secunderabad, the twin city of Hyderabad, is the headquarters of South Central Railway.