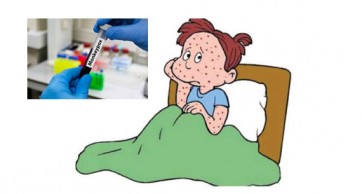 Hyderabad, July 25 (IANS) Samples collected from a man with suspected symptoms of Monkeypox were sent to the National Institute of Virology (NIV) Pune on Monday.

Five types of samples of the 40-year-old man currently in isolation at Fever Hospital in Hyderabad were collected and sent to the lab. The samples include swab from throat, blood, urine, from lesions on skin.

According to Fever Hospital superintendent Dr K. Shankar, the results are likely to be available by Tuesday evening

He termed the condition of the man as stable. According to him, the patient is restless and has a running fever.

"The lesions on his neck, hands and chest are like lesions from Monkeypox. It may also be chickenpox," Dr Shankar said.

The samples were collected after the man was shifted from his home town Kamareddy to Hyderabad on Sunday evening.

According to officials he arrived in Kamareddy from Kuwait on July 6. He developed fever on July 20 and later when there were rashes on the body, he approached a private hospital in the town.

Suspecting it to be a case of Monkeypox, doctors referred him to Kamareddy District Hospital and from there he was sent in an ambulance to Hyderabad on Sunday.

Director of Public Health Dr G. Srinivasa Rao said the man's six close contacts were also identified. Though they have no symptoms, the authorities kept them in isolation as a precautionary measure.

The health department is also trying to trace those who came into contact with them during the last few days.

The director of public health said that people need not panic over Monkeypox as it is not a fatal disease. He said health minister Harish Rao was monitoring the situation and giving them directions. "We are taking all necessary measures," he said.

Fever Hospital in Hyderabad recently set up two isolation wards for Monkeypox cases. One isolation ward each was opened for male and female patients.

Superintendent of the hospital said they have arranged for 36 beds and the requisite staff, equipment and medicines.

Fever Hospital, as the Sir Ronald Ross Institute for Tropical and Communicable Diseases is popularly known, has been declared a nodal centre for treatment of suspected Monkeypox cases. On Sunday, the first suspected case was admitted.

The Fever Hospital had also handled the first few suspected cases of Covid-19 in March, 2020.