Congress takes out huge rally in Hyderabad in support of Sonia 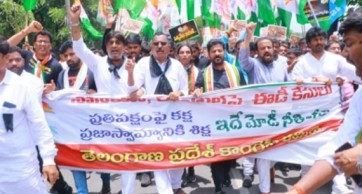 Hyderabad, July 21 (IANS) The Congress on Thursday took out a huge rally in Hyderabad against the questioning of their leader Sonia Gandhi by the Enforcement Directorate in the National Herald case.

The Congress leaders and workers later sat on a dharna at the ED office to condemn what they call attempts by the Narendra Modi government to implicate Sonia Gandhi in a false case. They announced that the protest will continue till Sonia Gandhi comes out of the ED office in New Delhi.

The rally and dharna disrupted traffic on major roads around Hussain Sagar and Basheerbagh in the heart of the city.

Large number of party workers participated in the rally. Holding party flags and placards, they raised slogans against the Modi government. Some of them were carrying black flags and black balloons.

Former MP Anjan Kumar Yadav led a protest rally from Adarsh Nagar to the ED office. "ED for Modi, BJP Hatao Desh Bachao", reads a huge banner carried by the protestors amid the beating of drums.

Telangana Pradesh Congress Committee organized the rally in response to the call given by the party's central leadership to organise the protest.

Revanth Reddy stated that vendetta politics by the BJP will not stand on Sonia Gandhi. "We will not tolerate the blatant misuse of power by ED and will fight back until justice prevails," he said.

Former state Congress chief Ponnala Lakshmaiah said a family who sacrificed lives, property and posts for the country was being targeted by the Modi government.