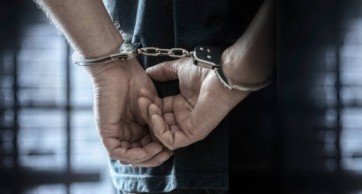 Police arrested him from Ghatkesar toll plaza near Hyderabad in the early hours of the day. A court in Rangareddy district later granted him bail.

Police said the BJP leader was arrested for indulging in hate speech and inciting hatred and causing provocation for violence through an event organised by the cultural team of the BJP on Telangana Formation Day (June 2).

A case was registered against them at the Hayathnagar Police Station under Rachakonda Police Commissionerate.

The complainant had alleged that the organisers misused the platform to defame the government schemes with false accusation on the CM and the government with an intention to mislead the people and provoke hatred and unrest.

According to police, under the leadership state BJP president Bandi Sanjay and organisers Jitta Balakrishna Reddy and Rani Rudrama organised an event in view of Telangana Formation Day and 'misused the dais for performing a skit (hate act)' with the help of BJP cultural team member Boddu Yellanna alias Daruvu Yellanna by insulting a person who is holding a constitutional post being democratically elected by the people of the state. The skit was telecast on a Telugu TV news channel.

A case was registered against Bandi Sanjay, Balakrishna Reddy, Rani Rudramma, Boddu Yellanna and his team.

On examining the video, police found that the organisers made 'derogatory comments, personal attacks depicting the chief minister as boozer, cheater, etc., to lower the image of a person elected by democratic means and holding a constitutional post'.

Meanwhile, Bandi Sanjay condemned the midnight arrest of Balakrishna Reddy. He alleged that the TRS government was trying to create an atmosphere of fear by resorting to 'undemocratic means'.